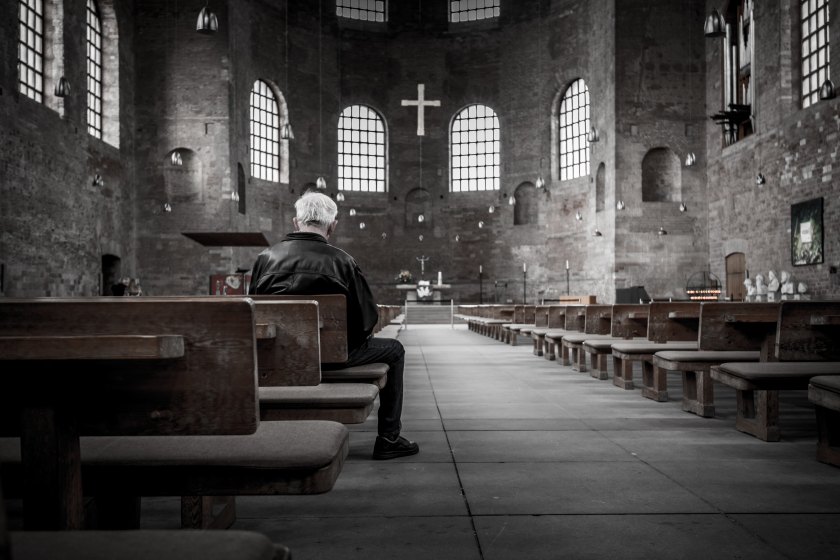 PURE AND UNDEFILED RELIGION
Religion that is pure and undefiled before God, the Father, is this: to visit orphans and widows in their affliction, and to keep oneself unstained from the world.
James 1:26 (emphasis added)

The other week I was driving with our three daughters. My wife was absent, but we pulled up to an intersection where a homeless gentleman was panhandling. Bypassing my usual excuses, I rolled down the window and passed him a few dollars. Really, just a few dollars. I wasn’t thinking too much about it, and I don’t usually give to panhandlers, telling myself they will use it to fuel addiction. While that very well may be true, for some reason I felt bad and gave the guy a few bucks.

I hit the gas and went through the intersection not thinking too much about the transaction. My oldest, who is six, quietly asked, “daddy, why did you give that man money?” Immediately, my mind was flooded with the complexities of explaining why I gave money to a panhandler. Subconsciously, I was considering how the sum total of this man’s circumstances and choices had led him to a life of homelessness and drug addiction, but I couldn’t say that. I simply related that he didn’t have a place to live and was hungry. The girls were silent for a moment, considering what I had said prior to returning to the levity of their carefree childhood.

IT ONLY TAKES ONE SENTENCE
I can imagine James was a practical man who carried out the Gospel in his day-to-day life. He didn’t pull any punches in his scathing letter, often writing in a biting fashion. If I were the recipient of this letter, I would probably feel rather sheepish. However, I think that was partially his intent. To admonish, to teach; not to make his hearers feel wonderful about themselves. Perhaps too often we subconsciously justify our lifestyle, neglecting the very practical religious principles outlined in James.

James felt it appropriate to sum up religion in just one sentence. “…To visit orphans and widows in their affliction, and to keep oneself unstained from the world.” Notice James doesn’t declare religion itself as wrong or evil. Rather, he concisely describes what religion should look like. James was certainly considering the religious leaders of his day. They were so concerned with principles, theory, and ritual they completely forgot people. James probably noticed this occurring amongst Jewish Christians, thus necessitating his letter.

“James felt it appropriate to sum up religion in just one sentence.”

Why is it that we complicate religion? Why don’t we take this concept seriously, instead often regressing toward ritual? We draft policy manuals, solidify creeds, form denominations and neglect the simple admonition to care for those who are hurting and broken. Paul notes in Galatians 6:2, “bear one another’s burdens, and so fulfill the law of Christ.” Again, the Apostle is able to summarize the Gospel in a sentence. Help each other when you observe a need.

JUST WIDOWS AND ORPHANS?
James wasn’t suggesting Christians help only widows and orphans. Rather, he was using hyperbole, illustrating those who would be utterly destitute in first century Israel. Help the drug addict, help the foster youth, help the single mother. Bear one another’s burdens. This is religion, pure and undefiled. It’s what Jesus did regularly. It’s how he spent his life, and, it’s how we should spend our lives.

James is officiating a call to action. As much as this letter appears critical, that was not his intent. James is utilizing the simplicity of the Gospel as a catalyst; a call to action. He wasn’t condemning those he was writing to, he was inspiring them to act. He was curbing a dangerous trend of valuing ritual over reality.

“What good is it, my brothers, if someone says he has faith but does not have works? Can that faith save him? If a brother or sister is poorly clothed and lacking in daily food, and one of you says to them, “Go in peace, be warmed and filled,” without giving them the things needed for the body, what good is that? So also faith by itself, if it does not have works, is dead. But someone will say, “You have faith and I have works.” Show me your faith apart from your works, and I will show you my faith by my works.”
James 2:14

If there was any equivocating regarding James’ intent, I think it has been resolved. James is calling his fellow believers to action. Pair real-world actions with faith and theory. Helping those who are destitute constitutes the Christian religion. Too often we neglect this fact in favor of ritual and organization. We break fellowship over petty differences and demand adherence to creeds and documents and charters that Christ never spoke of. Don’t mistake me, as I’m not criticizing organized religion as a whole, only the product that it often becomes. In my opinion, many denominations are once valid movements that have solidified into bureaucracies. We have to collectively break out of that mold.

REORIENTING OUR THINKING
How do we then begin to reorient our thinking? I think the answer is simple enough, and in fact is the very point James is attempting to illustrate. Our religion constitutes more than theory; it requires action. Simply begin to act. It may be uncomfortable, sacrificial, heck, even exhausting. Serving isn’t always glamorous. We shouldn’t expect it to be. Here are a few simple steps to help reorient thinking toward action.

(1) BEGIN FROM A SOLID VANTAGE POINT – Pray up, read up, get right with God. Forgive; mend relationships. Ask for forgiveness. We can’t help others if our lives are in shambles or we are not in a good position spiritually. Do this in conjunction with action.

(2) JUST START SOMEWHERE – Nothing is really required to begin ministry of this type. It consists of helping the individuals you encounter every day. Bear one another’s burdens. You needn’t be erudite or well spoken, you simply must act. Don’t wait around. Put into action what you believe.

(3) DON’T DO IT FOR ANY REASON OTHER THAN TO HELP – Don’t look for recognition. Just help for the sake of helping. In Matthew chapter six, Jesus instructs his followers to hide what the left hand was doing from the right. He was using an illustration with the intent of teaching humility in philanthropy. We don’t give or help for recognition. It’s a blessing to help someone expecting nothing in return.

JUST DO IT
Yes, it’s the Nike motto, but I wish it were the Christian motto. “But be doers of the word, and not hearers only” (James 1:22). If the collective Christian family began to act in such a manner, the world would be utterly washed clean by love and compassion. The demonstrative action of the church should be a catalyst for conversion. The actions of the church should compel unbelievers to believe. Let’s follow James, putting aside ritual and embrace pure religion, which is simply to love and help one another.

3 thoughts on “PURE AND UNDEFILED RELIGION”